By Bob Raymer, disciple of Paramahansa Yogananda and Spiritual Director of Song of the Morning Ranch until his passing in 2008. 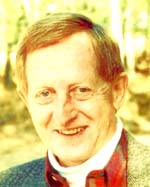 I met Master in 1951, and I had previously read “Autobiography of a Yogi,” and the thing that struck me about that book (the whole book struck me, obviously) I felt tremendously uplifted, as most of us who have read it. When I read the book, other than feeling Master’s presence and feeling an awakening, the thing that really struck me was the part about the Kriya Yoga. I had tried to practice meditation before. I hadn’t had any teachers. I just read books. I had studied the Vedanta philosophies, I was very involved with Ramakrishna and other saints like that. I knew I had to learn how to meditate, so I would try to practice. I would try to sit down for 10 minutes or a half-hour a day, at least. That would go on for a while, but my mind was so restless, I couldn’t do it any more. I’d stop, then I’d get mad at myself. I’d write these notes: “I hereby swear I am going to meditate at least 10 or 15 minutes a day, daily.” And then all of a sudden I’d flunk out again. But after reading Master’s book, I thought, “This is the key: Kriya Yoga practice is exactly what I need.”

So I wrote to Him and I said, “Master, please, by return air mail (I was kind of naive,) send me instructions how I may do this Kriya Yoga.” So then, I got this whole packet from SRF — about joining the organization, taking the lessons, and so on. There was no letter from Master, just something from the Headquarters, and I really wasn’t interested in joining any organizations, or having anything to do with Churches. This was back in — it must have been 1949 or 1950, somewhere in there. So then, I sort of dropped the whole thing.

One cold winter in 1951, my wife and I decided we wanted to get out of Minnesota, and to have a vacation in Phoenix. I had an airplane at that time, and we flew out in my airplane and got there on a Saturday. We saw this little add in the paper, SELF-REALIZATION FELLOWSHIP, and that kind of caught my eye. My wife said, “We ought to go to the Church, and see what it is like,” and we had a big debate because I wanted to stay in the sun. We had very little sun in Minnesota. But she directed me to go.

So anyway, we went to Church that next morning. And as the Service started, I started feeling happier and happier. When Herbert Fried, the Minister, started singing, “Door of My Heart,” well, I just felt like my whole heart was beginning to open, and it really was a strange sensation. I just felt something stirring there, I didn’t know what it was. So, I got very interested in what was happening to me.

I was very confused, I never had anything like that happen to me before. I got to talking to Herbert after the Service, and he invited me to come over in the afternoons, and we could start to talk about these things. I said, “Well, I want this Kriya Yoga.” He said, “Well, I can’t give it to you now, without Master’s permission. I’m not qualified to give it. But,” he said, “we’ll just see what happens.”

Anyway, I went over Monday, and I went over Tuesday. And he came out — his eyes were big as saucers. “You’ll never guess what happened,” he said. “Master called me up about 3 o’clock this morning, and he said to bring you and Mrs. Raymer to Los Angeles immediately.” I don’t think Herbert had mentioned my name or anything, but Master just called up and told him what to do. So the next day, we all climbed into my airplane and flew over to Los Angeles. Master wanted both of us, my wife and I, to take a tour. He wanted us to go to the Hollywood Church, He wanted us to go down to visit the Lake Shrine, and also the one in Long Beach. He gave instructions and provided a car, which picked us up at the hotel. After we went to all of these different places, we were to meet back at Mount Washington, for a visit with Master. Well, my wife Betty decided that she hadn’t seen her Aunt Gertrude for a long time, and she didn’t want to go. I think it was about 3 or 4 o’clock in the afternoon. We arrived at Mount Washington in the afternoon, so they put me in the Chapel there. They wanted me to stay there, and then “Master will call you.” Well, I went into the Chapel, and I waited, and I waited, and I waited. And I thought, “Oh, my God. He’s clairvoyant, he’s omniscient, and He sees what a mess I am, and He’s decided not to see me.” All these weird thoughts were going around in my head. Just about the time I was ready to give up all hope, somebody came in and said, “Master will see you now.” So, we marched up those flights of stairs to the third floor of Mount Washington, and I was really getting nervous, because my concept of a Master is that He knew everything, and to me, it was even greater than seeing the President of the United States, or anybody I could even imagine in this world. A full blown, honest to God Master! To see a big man like that was almost more than I could conceive of.

When I got up to the third floor, I was shaking. All of a sudden, the door opened, and there was Master! He had a big smile on His face, and He just grabbed me and pulled me into His arms, and I felt such incredible love from Him. He was so beautiful – so incredible. It wasn’t anything He did or said, but it was what He radiated. It was just like He had hit me on the head with a baseball bat, it just about knocked me out.

He sat me down, and started to tell me all kinds of things about my life — some of them I had forgotten. He touched on a lot of different things. He hit the nail right on the head, and some things really hit me deeply. I haven’t spoken about these things, these were things He knew about me that were very private, and, you know, He told me in such a beautiful way that it was just incredible, He kind of shocked me. But He did everything with such love. And then He ordered some tea for us, so somebody brought in some tea with these little biscuits and baklavas — sweets. And He would put these baklavas in my mouth. So, this is how I met Master.

During this conversation we were having, I said, “Master, I want to know how to do this Kriya Yoga, will you teach me how to do this?” And somehow, He just managed to always change the subject. And so I’d ask Him again. And this time, He got a little irritated about this, and I thought, “Oh, boy, what am I going to do?” And then He’d change the subject, He’d get off on something else. Finally, I don’t know how I had the nerve to do it, but I asked Him one more time, “Master, when can I get this Kriya Yoga?” And He said, “All right. Tomorrow morning at 10 o’clock.” Master put me down on my knees, and He gave me the blessing. I was right in front of Him. He was sitting on the chair. He grabbed both of my hands together, and He kept repeating “Heavenly Father, Divine Mother, Jesus, Babaji, Lahiri Mahasaya,” and so forth. He kept repeating those names. He must have gone on I don’t know how long, it seemed endless. And I was feeling this energy in my body, It was really incredible. The next day I had the Kriya Initiation. I had it in the morning — there was a Reverend Bernard who used to be there, and I believe we did it in the Hollywood temple. I wasn’t really bowled over by it or anything like that, and I had a lot of business I was doing that day, so I didn’t practice at all, I just got the Initiation. I decided that that evening I really wanted to be alone so I could do this Kriya practice, and find out about it.

After dinner that evening, we returned to the Hollywood Knickerbocker Hotel where we had a suite of rooms, and Betty went to the bedroom. I got a chair out, and put a blanket over the chair, and then I started to practice the Kriya — the technique. I started doing a few of these things. Well, all of a sudden, something happened in my spine, and it felt just like a snake was going right up my back, and it was just wiggling, and when it got up to my forehead, my whole forehead opened up. It wasn’t like the spiritual eye, but it was like the sun itself, just like a sunburst. It was an actual experience. It was like a hose with too much power, too much water going through it, would start to wiggle, and this was going up my back, and when it got up to my head, well, then my whole head just exploded and I fell off the chair. That was the first thing. I started moaning and groaning, making these weird noises, and I thought, “Oh, my God. This is what I have been seeking. This is what I have been searching for all my life.

I used to have a lot of ups and downs, like most of us — emotional swings, depression and so forth. And I thought, “From now on, no more of this, all I have to do is a couple of these Kriyas, and that’s the end.” And so, that was my introduction to Kriya Yoga.